The numbers of The International Yachting Media

Global Web use is significantly growing, with over one million new users every day and more than 3 billion active mobile social media users worldwide. Populations accessing the internet globally reaches almost 55 billion people, that is 9 out of 10 people. The number of social media active users has equally grown, with an estimated 35 billion users, 90% of which access from mobile platforms.

The numbers of The International Yachting Media are growing every year, capturing more and more readers as well as an increasingly large market share thanks to its consistent and uninterrupted content broadcasting. Today, the editorial group publishes 6 magazines in 4 languages, along with the brand-new Superyachts.News magazine and the Virtual Boat Show. 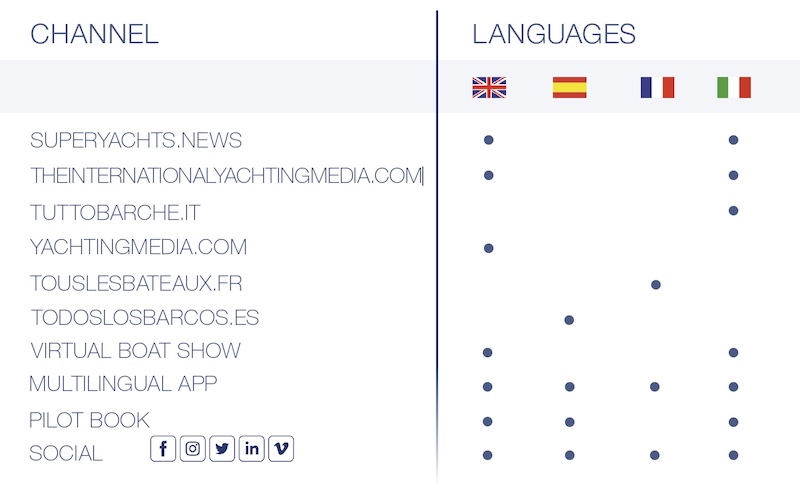 The daily and exhaustive publication of articles, videos, as well as the extensive daily posts on the main social media channels, have allowed the group to reach important milestones.

Born in 2018, the digital multimedia magazine “The International Yachting Media Digest” collects quarterly the “best of the best” of what has been published and offer it to readers in a container that, effectively, does not need paper to be leafed through. Completely ad-free, it represents another great marketing and communication success with over 500,000 views per issue.

Another blockbuster is represented by the Boating News App that, with more than 3.000 downloads per month, represent another digital and modern way to read all our magazines news, in four languages.

Today the group publishes daily on its 6 magazines with an average of 35 articles per week, establishing itself as a real yachting digital newspaper. Moreover, with over 150 posts per week, it is certainly one of the most popular magazines in the world of social media.

The complex and complete structure that allows for the release of a wide range of content has meant that today The International Yachting Media has an average of 900,000 views per week, from readers living in around 200 countries in the world.

The two main indicators that demonstrate the great ability to build effective and impactful communication are firstly, a daily average time spent on the website per users of around 10 minutes (a very high figure) and secondly, a 34% bounce rate indicating a great user experience.

In 2020, the group has decided to increase its market presence with the creation of the Virtual Boat Show – which has quickly become a reference point for boating with over 250,000 views in just after two months – and Superyachts.News, consolidating the market leadership of The International Yachting Media.